Why & How to Use Window Functions to Aggregate Data in Postgres

A window function is a feature developed in PostgreSQL — available since version 8.4 — to analyze data beyond the current row (hence the term “window”).

These windows can aggregate information to each row of your output. Apart from aggregate functions and groupings, window functions provide another way to perform calculations based on the values of several records.

Using window functions removes the hassle of using subqueries and JOINS to aggregate neighboring rows that can be related to the current row.

✅ You can use the CoderPad sandbox in a new browser window to run the queries in this tutorial — the table is already loaded for you!

Why use window functions

To get an idea of why you should use window functions, let’s start with an example database: 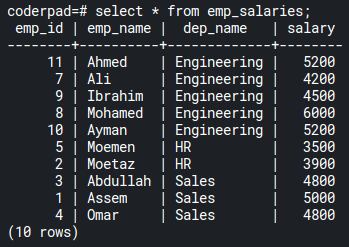 Using this data, we want to get a breakdown of salaries for each employee in every department. We want to analyze the max salary across each department to compare it with each employee record.

To get that query result, you would probably use a Common Table Expression (CTE) with a JOIN statement like the following:

That query will give you this output: 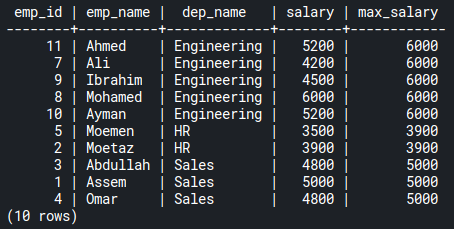 But a better way to get the same result is to use a window function like the following:

As you can see, using a window function makes writing complex SQL queries easy. It allows you to output the current rows and add aggregate values accordingly.

ℹ️ Notice that window functions allowed us to perform aggregation without using the GROUP BY clause, as in the case of aggregate functions.

In this tutorial, you can experiment with your own table or create a sample table that we will borrow from the PostgreSQL documentation with a simple tweak. If you’re doing this tutorial from your own IDE, you can create your sample table by running the following script:

⚠️ If you’re testing in your own environment, you’ll drop a table of the emp_salaries name if it does exist.

Alternatively if you want to skip the table creation task, you can use the CoderPad sandbox to run the rest of the tutorial, as the sandbox already has the table loaded for you.

The syntax of a window function is simple; it looks something like this:

The <function_name> is an aggregate function like SUM() , COUNT() , MAX() , MIN() , AVG() , RANK() , etc. This function can take a column as an argument and can also take other arguments depending on the use case.

To get an idea of how to best use window functions, we’ll start with a simple SQL query using an aggregate function:

This query outputs the maximum salary across all the records.

What if you want this max value next to each record in the table?

You might say this is easy; just add * next to the max_salary column. However, that query would create the following error:

This means that the first column of the emp_salaries table — emp_id column must appear in the GROUP BY clause or be used in an aggregate function.

To avoid this error, you have two options:

The shorter (and preferred) option for us is to take the window function route and write the following query:

With just OVER() , you can use MAX() as a window function to aggregate the maximum salary to each record in the table: 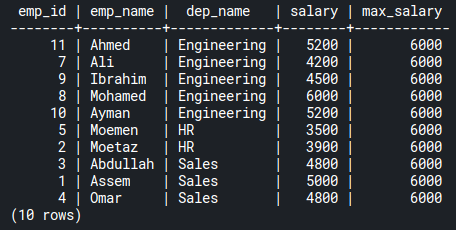 GROUP BY vs. PARTITION BY clauses

What if you want a breakdown of max salaries across each department?

This query gets only the maximum salary across each department:

Here, there is one column that represents the max salary per department. Again you wouldn’t easily be able to combine the other columns with the max_salary column unless you use window functions.

To compare each record with its corresponding maximum salary by department, use PARTITION BY :

This query results in the following records:

As you can see, the aggregate is done over the department names. So you get a breakdown of the max salary of each department next to each record in the emp_salaries table.

It’s important to note that the previous examples that you used with MAX() can also be applied with either MIN() , SUM() , or COUNT() . These are other aggregate functions and can also be used as window functions as follows:

which outputs the following result:

While we don’t cover AVG() here, you can find more information on it in the PostgreSQL docs here .

The ROW_NUMBER() is another useful window function. It assigns serial numbers to records according to the window. See the following example:

As you can see, the row_num column contains an ordered list of numbers across the whole table. That’s because the window here has boundaries across the table, as the OVER() clause doesn’t have arguments.

A practical use case for ROW_NUMBER() is to get the most senior employee in each department. Try it on your own and see what you get.

Notice that in this case we partition by the department name. That partition would give you a result like this:

As you can see, there is an ordered list according to each department. The engineering department has numbers 1 to 5 . HR: 1 and 2 . Sales: 1 to 3 .

PARTITION BY and ORDER BY clauses

A window function can have ORDER BY inside an OVER() clause. To see what that looks like, assume that emp_id represents seniority and that an emp_id of 8 precedes 9 , meaning that the former joined the company before the latter. We will then sort according to the emp_id to see the first employees who joined each department:

The seniority column represents ordered numbers according to the emp_id . If you filter by seniority with 1 values, you get the first employee for each department who joined the company.

Give it a try here using a subquery:

The RANK() window function returns the rank of the current row with gaps. But what do we mean by gaps?

This query returns the ranks of every employee, in descending order, according to each department. Gaps exist when there are duplicate values: 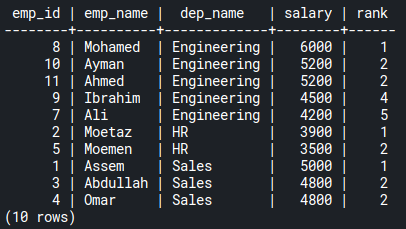 As you can see, Ayman and Ahmed share the same rank ( 2 ) on engineering department salaries. Rank 3 is a gap, and the RANK() function skips it. The next rank is 4 taken by Ibrahim .

DENSE_RANK() window function is similar to RANK() except that it returns the rank without gaps. If you replace RANK() with DENSE_RANK() in the previous query, you’ll find a result query like the following: 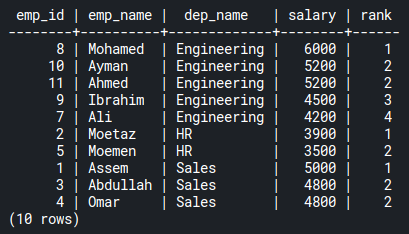 Window functions can make you productive. You will spend less time writing your queries with fewer lines of SQL.

In this tutorial, you saw how to use them in PostgreSQL. You learned how to use MAX , MIN , SUM , COUNT , AVG , ROW_NUMBER , RANK , and DENSE_RANK . There are also other window functions that you can check out in PostgreSQL documentation.